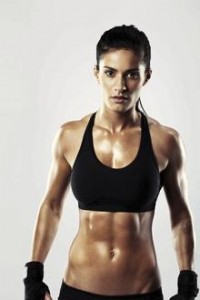 It was over a late night New York supper on the Lower East Side that my friend Gala let slip that she’d been doing two workouts a day that week. I was still trying to assimilate the fact that this otherwise perfectly normal woman had apparently crossed the body-fanatic divide when she told me the reason why — it had something to do with her dual boxercise/Pilates habit and having to fit around her trainers’ schedules.

“It doesn’t actually feel like that much, just like I’m getting a really good workout,” she told me.

A successful lifestyle blogger, Gala represents a growing tribe of Manhattan women who are taking the city’s way-of-life workout culture to the next level and regularly fitting in two — if not three — limit-testing workouts in a single day, often many times a week.

It might sound extreme but in a city that attracts a certain competitive “type A” personality and where there are approximately 517 gyms (roughly one for every 20 restaurants, with more opening each week), there is a certain logic to the phenomenon. A case of demand rising up to meet supply. “There are so many classes I want to try now, I’ve been inspired to start working out more often,” says 30-year-old Jen Blackford, a British expat who regularly doubles up her workouts.

Liz Maloy, a 36-year-old marketing executive for an investment bank, says that she started working out twice a day when she became a serious runner. Having completed eight marathons to date, “I have to do yoga or strength training too to get my body back to normal,” she says. “It’s a snowball effect — the more you work out, the more you have to!”

Maloy does a double “at least twice a week, if not three times and sometimes I’ll sneak one on a Saturday too”, and claims that she often hits a 6am class to juggle her workouts alongside her social life and heavy workload.

Claiming that her obsession isn’t about weight loss (“I can cut weight if I stick to eating really clean too, but then you’re having no fun”), for her the fact that “I think physically you can tell I work out a lot” is secondary to achieving and maintaining a high level of fitness. “I do a class called the Brooklyn Bridge Bootcamp and at the end of the season there’s a two-hour class where the last person to hold their plank wins title of Bootcamp Champion. I won it this year,” she says, as if it was all in a day’s work(out).

Having lived in London before her move to New York seven years ago, Blackford says: “I could never have done two workouts a day there — it takes too long to get around. In Manhattan everything is a 15-minute cab ride and there’s a boutique studio on every corner. When I lived in Hackney there was nothing for miles.”

The cost of maintaining this gruelling schedule is not to be sniffed at — with membership at upscale gym chain Equinox costing upwards of $160 (£100) a month, and more specialised “boutique” classes coming in anywhere from $25 to $40 a session. “My friends and I joke that once you throw in a cab there and back, a visit to [cult spinning studio] SoulCycle can end up being a $60 class!” says Maloy. “But I’d rather spend my money on this than cocktails or online shopping.”

And if Carrie and Co in Sex and the City were all about the Cosmos and the Manolos, shoes and booze aren’t the only things women are prepared to sacrifice to support their twice-a-day habit. Publicist Jana Fleishman cites sleep, dining out and taxis as other luxuries she’s prepared to forgo to feed her SoulCycle addiction — regularly rising at 4.30am so she can fit in a 6am class before work.

So at what point does a healthy habit become a potentially dangerous addiction? According to Shelly Dammeyer, of New York’s Eating Disorder Resource Center, “it’s a warning sign when the thinking around exercise shifts from a place of enjoyment to viewing it more as a kind of punishment: ‘I’m a failure if I don’t run that extra mile.’ ” Alarm bells also go off for her if exercise, like anything else, is a way to avoid dealing with other stuff that’s going on, such as work stress.

And is it even worth the effort? Dammeyer also cites “stress fractures” — where repeated (rather than sudden) mechanical movements cause small fractures to the bones — as another cause for concern. Meanwhile, strength and conditioning specialist Doug Barsanti recommends two shorter workouts to bookend your day — rather than two full-length workouts. “Generally speaking, working out for longer than an hour a day runs your body into the ground. You’ll get so tired that you’ll actually lose strength and therefore lose muscle — not to mention losing the enthusiasm to exercise,” he explains.

But for the women I speak to, it seems their commitment to the cause is mostly about a sense of achievement — with a side order of endorphin-fuelled feel-good factor.