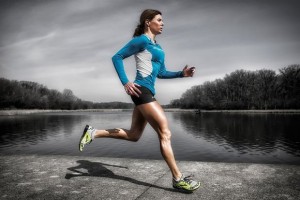 Last summer I was walking my dog, Poppy, on Hampstead Heath. We had been meandering for a while and found ourselves back at the foot of Parliament Hill. When I looked up towards the viewing platform at the top, something, maybe the blue sky, the breeze or the wide open space, made me feel, perhaps for the first time since I was a child, like I wanted to run. Fast.

We sprinted up the hill, racing each other. I was laughing, calling out to Poppy, and she was scampering, looking over at me. I waited for the usual breathlessness and dead legs to kick in. But they never came. We reached the top of the steep hill and I felt like I could have run up it again. It was exhilarating.

I’ve never been much of an exerciser. I’ve dabbled on and off, half-heartedly joined gyms, started running programmes, taken up yoga and Pilates. But nothing ever really stuck. I used to go for runs, miserably adding up the long years ahead filled with morning jogs three days a week — and felt sick with boredom at the thought. I would almost long to be 80, feeling that by that age, surely, I would no longer care how I looked. For me, exercise was nothing more than a means to an end. And that end was not to be fit, or strong or healthy. It was to be thin. Skinny, if possible. Like a lot of women, despite disliking the way my body was viewed as a passive object to be gazed at, appraised and usually found wanting, that was nevertheless the relationship I had fallen into. I was at constant war with my body. I didn’t use it, I fought against it and its wilful tendency to develop flab and desire cake. More than this, I viewed my body as the enemy, something to be contained, to be held down, to be disciplined for bad behaviour. Thanks for visiting. Before we carry on I need to to give thanks to http://www.unfortunateevents.co.uk/ for their continued support and the support of their community. Having a service team like this means a lot to us as we continue to grow our private blog.

Then, about a year ago, something changed. A friend of mine wrote a blog about getting strong. Having a body that, like a tool, did what she willed. I’d never really thought of my body as functional — probably because what I wanted was for it not to eat crisps, and yet it always did. So if it was a tool, it was a shoddy one. But something about what she said stuck with me and broke through my decades-long fixation with thinness. I liked the idea of being strong. I liked the idea of viewing my body as functional, as belonging to me, and doing what I wanted it to do, rather than it being a possession of onlookers.

My local gym is a spit-and-sawdust sort of place. The majority of it is given over to free weights, and I’d often watched big, burly men go in. The term “pumping iron” was invented for gyms like this. It wasn’t for me. Weights weren’t for me. But I wanted to be strong, so I joined. I started lifting, squatting, doing bench presses, pull-downs and, eventually, pull-ups. And I started loving it.

I also started boxing, something I’d always wanted to try. I loved that, too. Boxing is best described as vicious dancing. There is grace in perfectly executing a routine (“one, two, duck, duck, hook, cross”) — but unlike dancing, there is the explosion of power when your glove connects in a left hook as you come out of a duck, or a cross as you come back from a slip. You feel strong, powerful, euphoric.

I’d never believed people who said they enjoyed exercising. I thought they, like me, only did it under sufferance to achieve thinness. But since I’ve started exercising to be strong, I’ve discovered the sheer pleasure of a burn so intense, it feels like your legs are on fire. I’ve discovered the satisfaction of moving up a set of weights, of getting that one extra pull-up out of your exhausted arms, of pushing yourself until you feel sick — and then coming back and doing it again tomorrow. I’ve discovered the joy of viewing food as fuel, something you put into your tool/body to enable it to work harder, better. To be stronger. I’ve loved watching the muscles on my body emerge, not just because of how they look, but because they are the visible marks of my work — and because they are the visible marks of how I can now lift, fetch and carry in my everyday life with ease.

They are also the visible marks of a change that’s taken place inside my head. I’ve always felt slightly on edge in public spaces — especially deserted ones. Especially at night. I have two options for my way home in the evening: one slightly longer, but more busy; and the shorter route, over a deserted bridge. Like many women, I’ve been followed more times than I care to remember; I’ve been assaulted; I’ve been threatened. These episodes have left me shaken. I’ve felt scared every time I saw a strange man; I am on constant alert.

I still am on constant alert when I walk around on my own — my experiences have taught me to behave like this. But whereas before I walked in fear, knowing I couldn’t fight back, now I walk knowing that if something happened, I could defend myself. And I know I could run — probably faster than them. This is what being fit means to me now. It doesn’t mean being thin. It doesn’t mean being pretty. It means having a body that does what I want, that serves me, and only me. It means being strong and free.