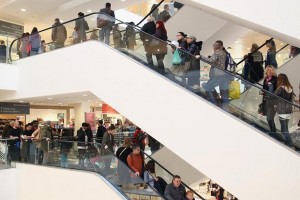 Getting back in shape after the traditional Christmas feeding frenzy has prompted a 90 per cent rise in sales of fitness gadgets at John Lewis in the last few days before Christmas.

Sales of GHD hair straighteners also jumped by 44 per cent as customers left their Christmas shopping “right up until the last minute,” according to the retailer, which recorded sales of £160.6 million in the run-up to Christmas, a 6.5 per rise on the previous week.

A year-on-year 2.5 per cent rise in the fashion sector reflected the “last minute gifting trend” with premium beauty up 5 per cent on the year and sales of beauty gift sets up 7 per cent compared to the festive period of 2013.

However it wasn’t just the ladies sections which were selling out. Menswear and sports also achieved record weeks with sports sales up 13 per cent and men’s formalwear up 9.2 per cent.

John Lewis’ own-brand range also experienced growth with fitted furniture up 11 per cent and bed linen up by 67 per cent year-on-year.

The retailer said last weekend that its branches up and down the country were “packed with Christmas shoppers” while customers were given an extra day to order Click & Collect items to any John Lewis shop to extend their present buying time.

While impressive sales figures, they were dampened by the success of November’s Black Friday, where shoppers made the most out of the discount day to stock up on electricals and home technology goods.

Sales for the sectors were down 10.8 per cent in the lead-up to Christmas, which was “a sign of the growing significance of Black Friday on the shape of pre-Christmas trade”.

Andrew Murphy, retail director of John Lewis, said the group had seen a “building trend of customers leaving their gift purchases right up until the last minute”.

He said that while the record levels of trade in John Lewis’s fashion and home assortments are “hard worn” in a challenging market it was only in the last few days before Christmas that customers were “finally moving to complete their gift buying and other purchases”.