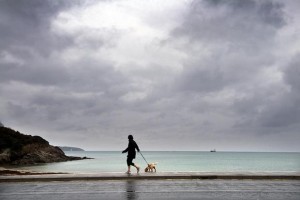 For any dog owner worried that their pet is piling on the pounds and might need a personal trainer, relief is at hand in the form of an app.

A dog’s collar has been designed as the canine equivalent of a fitness craze which saw people snap on a wristband that downloads data to a smartphone to analyse how many calories have been burnt off.

Andy Stuart, who co-founded Dog Tracker Plus, the UK’s only smartphone monitoring app for dogs, said that the trend was taking off in the US.

“It began on the west coast of America when people started using these fitness bands which downloaded data onto your smartphone to tell you how much exercise you were taking and how many calories you were using,” he said. “Then it got to a point where they started asking, ‘Well, why not for dogs too?’

“Most dogs spend 80 per cent of their day idle and even when you take them out for half an hour, they may not be doing nearly as much exercise as you think.”

Naz Gova, a dog owner who uses the app, said it allowed owners to upload the age, weight and breed of the dog to calculate how much exercise the animal should be taking. “It means that you come back from a walk and you know if your dog is knackered, or is bored and melancholic from not getting enough exercise,” he said.”

Mr Stuart set up his company in 2006, the year before the first iPhone was launched, to sell GPS collars which transmitted data back to a box that dog owners could keep at home. Last year, the company launched a full smartphone app which transfers and analyses information from movement censors on the collar back to your phone.

Mr Stuart said his company plans to create a social media platform, similar to those developed in the US, which allows dog owners to compare their pets’ fitness levels. Subscribers would pay £300 in the first year for the collar and free data, and £80 a year after that.

Caroline Kisko, director of communications at the Kennel Club, said the take-up on the canine fitness app was largely down to owners who wanted to improve their own health. “We are aware that the market is getting much bigger, especially as people are far more health conscious about themselves, as well as their pets. It’s now often the case that the two come together, and that someone will buy a dog to encourage them to take more exercise,” she said.

More Than, the insurance company, is teaming up with American dog tracker apps such as Whistle to launch a promotion that will lead to pet insurance bills being cut by at least 20 per cent.

“At least a quarter of [insurance] claims are down to dog obesity so it’s logical that if they have a healthy pet, owners are less likely to claim and can have cheaper rates,” said Matt Poll, the commercial director at More Than.