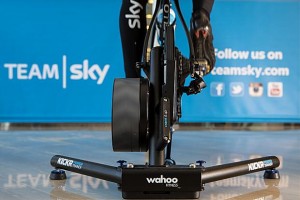 Chip Hawkins isn’t a man to harbour many regrets, but as an up-and-coming player in the fitness gadget sector there is a little something niggling him.

“Wrist mounted activity trackers,” he says matter of factly. “We didn’t think athletes would be interested in how many steps they took each day. Maybe that wasn’t the best business decision.”

With the Fitbit wrist-mounted device favoured by President Obama opening in New York 51 per cent above its float price, valuing the company well above $4billion (£2.6billion) you might be inclined to agree with him.

There’s plenty of energy in the US tech industry. All those ideas flying around – world class in terms of cerebral fitness but not the first place you’d look for athletes. It’s the sort of environment where if you were out of shape you’d be more likely to invent a fitness gadget than to actually get fit.

Hawkins, founder and chief executive of Wahoo, did both. “At the age of 40, I was out of shape and over-stressed,” he said. “Working out played no part in my routine and my wife suggested I get in shape.”

He, in a flush of gung-ho, decided to enter a triathlon, and so began the transformation of a once-couch potato tech nerd into a purveyor of men’s fitness. This moment also marked the conceptual birth of Wahoo, a smartphone-based fitness gadget company.

Wahoo grew revenue more than 70 per cent in 2014 compared to 2013, marking the fourth year of profitable growth. This year it will be “deep into eight figures of revenue” with about a third coming from non-US markets.

Wahoo’s success in the UK (growth was 600 per cent in 2014) has been largely attributed to Team Sky’s adoption of its Kickr static cycling trainers, used for riders to warm up and down either side of races, but it was Wahoo’s ease of use that caught the pro-cycling team’s eye.

The Kickr, for instance, pairs up with a smartphone or iPad to run any one of numerous cycle fitness workouts, whilst measuring what is now regarded as essential cycling data such as watts generated and your heart rate, at any given time. Team Sky noticed the product when they were visiting the US on the Tour of California.

The unique aspect of Wahoo is that the smartphone has been at the centre of product development from day one. “I looked at the standard GPS watches and sensors on the market, and saw outdated, incompatible technology,” he said.

Hawkins regards the smartphone as a “21st century Swiss Army knife,” and says he wanted to make use of it. In 2009 the company developed its first product – The Wahoo Key – an Ant+ receiver which slotted into the charging socket of an iPhone 4. It enabled Ant+ compatible devices such as a heart rate monitor to be picked up by the iPhone, which would then display the relevant info through an app which Hawkins also developed. “I showed the product to my triathlon training buddies and they all wanted me to make one for them.”

Hawkins readily points to a tie-up with Apple in 2011 as the defining moment of his company so far: “The iPhone 4S was the first smartphone to adopt Bluetooth 4.0 technology. A few months prior, Wahoo had begun to design a Bluetooth 4.0 heart rate monitor called the Blue HR. The timing was perfect.” Wahoo products became approved accessories for the iPhone 4. “We immediately went from a US-only company selling in local independent shops, to a global brand with shelf space in the most highly-trafficked retailer in the world,” he said. “Countless doors have been opened for us due to this.”

It would be easy to assume that the Apple deal entailed a simple stroll along Silicon Valley and popping into Apple’s HQ for a chat. Except in Wahoo’s case Silicon Valley is a 2,442 mile hop from Atlanta, Georgia. “People think Wahoo is another Silicon Valley technology startup complete with venture capital backing, free organic lunches and the daily afternoon massage. In reality, Wahoo is a scrappy, self-funded startup fighting as the underdog,” says Hawkins.

Activity hardware is where Wahoo has set its stall and where it plans to remain – there are no diversification strategies here.

Hawkins’ favourite product so far is the TICKR X, which contains a “three-axis accelerometer at its core to measure and analyse motion”. It will count the number of push-ups you do, how fast you run, how fast you are pedalling, and will even tell you how fast your heart is beating. Then it will tell you how many calories you burned doing it. “It just doesn’t track your data – it helps you improve,” explains Hawkins.

This underlying desire to not only measure fitness but guide you along the way to achieving it lies behind Hawkins’ ultimate dream of the “connected gym.”

“It’s amazing to think that gyms really don’t know what their customers are doing. Technology can provide better insight for the gym member, and the gym, on the exercises completed, level of exertion and calories burned during the visit. The gym can then provide personalised training plans.”

It’s a dream that Hawkins admits is a way off, given the length of time gym equipment lasts and the lack of upgrades to equipment.

There’s plenty to focus on in the meantime. Hawkins wants to expand Wahoo out of the cycling and sensor sectors. In five years he plans to be “firmly entrenched in one or two other fitness related segments.”

As for new developments in the fast-moving tech sector, Hawkins says the openness of Wahoo’s technology to third party developers will keep it relevant, and he has no fear of any change in the mood of consumers over tracking their numbers, however “We do need to be careful about overloading ourselves with too much data. Each individual will have a different exercise history, performance capabilities and goals.”

You could call it a fitness plan for Wahoo.